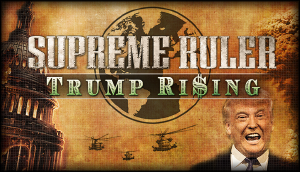 Supreme Ruler 2020 is a free DLC that was developed and published by BattleGoat Studios. The DLC was released on July 26th, 2016.

Get it now on Steam!

Within the United States, civil unrest fueled by racial tensions reaches even higher than in the 1960's. To China and Russia, the new US President seems so unpredictable and reckless that it seems logical to make a pre-emptive strike rather than wait for him to have a 'bad hair day' and launch a strike against them. In Western Europe, leaders are shaken by their new reality and realize they may have to make concessions to Russia now that America can no longer be relied upon. The European Union itself is in disarray as the UK prepares to leave and forge its own relationships. In Mexico, and even in Canada, militaries are brought to an unprecedented level of readiness over concern of Trump's ambitions.

References in other media[edit | edit source]