Supreme Ruler The Great War is the newest title in the Supreme Ruler series. It was developed and published by BattleGoat Studios.  The game was released on August 1st, 2017. 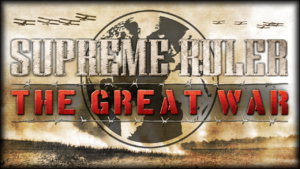 Continuing the Supreme Ruler franchise, BattleGoat brings you a new era, building upon a game system which has evolved over more than a decade. Set in the First World War, the Central Powers and the Triple Entente prepare to attack, with no understanding of the scale of conflict they will unleash. Over the coming years, the armies of these nations would come to understand how air power, submarines and artillery were about to transform how war was waged.

Players can chose to jump into the action as any region in the world through sandbox play or follow campaigns of key regions to watch historic events unfold. Make the correct Economic, Diplomatic, Domestic and Military decisions to assure the survival of your nation.